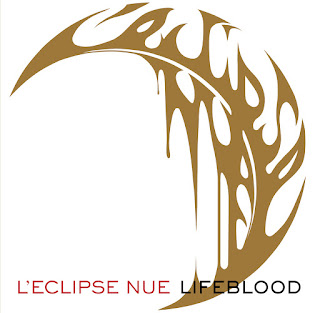 L’eclipse Nue is the project of Daniel Sine and has been recording and releasing since 2009. Lifeblood is around the 30th release by the project. It builds very quickly from slow ambient sound to big demonstrations of noise with vocals right at the heart of an impressive, distorted vortex of harsh noise. Sound switches between distant and forefront as things soon fall into a more Industrial/ambient area with dynamics and atmosphere taking president. The first track is good, after this, most of the album is low level scratching, vocal murmurings, rantings, scrapings, beeps and farts that build sonic landscapes. The fourth track A Single Breath, really lifts things back up, exploding brilliantly – a strong digital blast.  Departure is a good finale, ending things on a high.

The album has good production and dynamics but the work doesn’t have a strong identity to pull off the quieter, more experimental tracks. The opening, fourth and closing tracks where things are loaded, chaotic and violent are where L’eclipse really thrives and delivers.  But the quieter/slower tracks don’t hold well, the contrast doesn't gel. However, that said, he manages overload excellently, the balance is perfect, it’s not like a shittier Merzbow track where it’s just pointless overload to the point where it becomes ineffective noise; Sine handles overload very well. There are some conceptual ties to the buildings in different countries where the tracks were recorded. I feel the visuals could have emphasised this. The graphics look very professional but need to do more than just make the cd look good. The jewel case is ace. This isn’t a bad album, but it isn’t great either – only in parts.