Vomir, walls and beyond.

I felt my Vomir review a few weeks ago was too abstract; I feel the need to engage with the walls in a credible and thorough way. This review is an attempt to do that or begin to.

I recently bought 3 Vomir tapes at a live performance at Nottingham Chameleon Arts Cafe. The show was different to last time, it was different walls and there were no black bags on heads. Vomir stood still and motionless for nearly an hour as his wall played out. It was as if he was lost or seduced by his own wall of noise, or perhaps enhancing the supposed emptiness his walls are meant to reflect? The performance was extreme and unnerving as he showed no signs of movement or emotion, the build-up of sound on the powerful Chameleon Arts Café sound system was relentless and produced a massive void of sound. There was also a combined performance with author Paul Hegarty which was vastly different to Vomir and equally impressive. Hegarty also gave a talk on noise, he played audio samples and discussed them and ways of perceiving noise. This was interesting, funny and good to engage in rather than it being all noise acts. Nacht Und Nebel played and were great as usual. This is the second time I saw Vomir and both times were equally memorable. He previously said the following about playing live –

I guess you mean physically? Be (a)live is a fact that in any place, in any time claustration becomes an act of amputation in relation to the world.
As Loud as Possible magazine interview w Hicham Chadly, 2010. 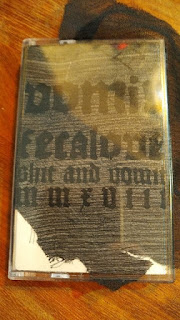 The Vomir side of this cassette does seem to build up as a sound form(less), as opposed to it being an immediate roar of sound which you’re immediately within. The wall does seem to be created by a deep/low rumble that is covered by a sharper/treblier crackle. The combination of these two elements can either simply just contrast or form a static void right in the core of the work.  The deeper rumble sound does seem to resonate and vary in its tone slightly; a wavering roar. Is the emptiness that is quoted in regard to Vomir’s sound replaced by a surrogate warmth via the simulated roar of flames? Or are you encased by radiating waves of emptiness on listening? Sometimes I think I hear other sounds buried deep in the mix.

Fecalove is at first playful in its colliding bouncing sounds that serve as an introduction before things shoot to the forefront of the listening sphere and collisions of sound become more aggressive. This is a very choppy, assaultive sound that doesn’t let you inside like a wall of noise does, it’s too shifting so focus is harder to achieve, you’re moved around a lot. As the track progressive walls of sharp noise to build, despite the up rise of intensity it does become easier to exist inside the sound than before.  The sound does occasionally falter and choke, to allow massive rebuilds of the sound or sketches of dying sound experimentation. 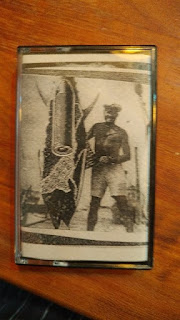 This Vomir release is very immediate, mid, wavering rumble that periodically sharpens in sound as if to intensify the waves of noise.  The movement from sharp to deep increases and splits so the deeper waves settle to a more permanent shape and the sharper crackle constantly shifts in a dramatic fashion. As echoes build and intensify from the deeper sound the sharper sound rises to flamelike intensity and shifts across the stereo range furiously. The flame like sharpness blast of static sound intensifies continuously and is now the focus of noise as echoes remain inside the core of the noise. The major shifts in sound happen early on, the sound eventually stabilises as a fattened out deeper, continuous roar of static.

Quebec’s Bleak Existence’s sound really focusses on a faltering crackle, the minimal nature of the track makes for a more fragile, shattered wall.  There is a continuous dying sound quality splattering and cackling throughout the track.  As it develops the faltering periodically increases as if dragged along at force.  The faltering noise becomes an aggressive stutter that intensifies to a fuller sound with a harder bass depth and sharpness that cuts behind the splattering.  An acceleration in sound leads to a sudden end. 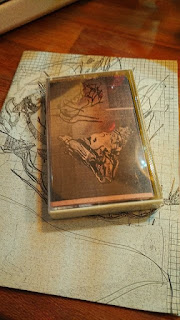 A sharp blast of Soyez Enfermés (be locked) begins to resonate in full restrained blast tunnel wall mode that seems to have a hissing back noise. It is as if the two exist side by side, deep roaring crackle and sharper static hiss. The deeper roar does seem to go through shifts in dynamic as if periodically riding across the stereo range as the static hiss becomes slightly deeper and acts as a base to the deeper noises. The shifts become more dramatic forming a widely looping wall as noises go off in the background.  The wall eventually seems to settle as the shifts are moved to the background and become noises behind the wall. The peace is temporary, a roaring, sharper distortion takes lead bringing things aggressively to the forefront of the work’s sound as it intensifies and accelerates into a roaring sharpened avalanche of static. This is by far the most dynamic Vomir recording of the three that I have reviewed in this piece. As the tape moved on, I placed my hands over the boom boxes built in speakers I was able to interact and play with the wall as this adjusted and wavered it’s sound, as I patted the speaker new resonations and pulsations occurred. ‘Click’, the tape ended.

The cOLIQue side is split across seven tracks. The maker is called Alex, possibly French. It’s difficult to differentiate the tracks of cOLIQue as there is a formless form of experimentation flowing throughout what is happening. Low level electronic noise and acoustic instrumental tinkering combine and occur with both taking lead at different times. I’m unsure if old soundtracks are used as samples or this is genuine pre-recorded work by the artist added into the mix. It forms timeless, abstract, old world landscapes of sound and noise; the instrumentation is very much early 20th century whilst the electronic noise juxtaposes this as contemporary. I am unsure if these passages of sound poetry are spontaneously improvised or rehearsed. This is the second cOLIQue release, the project is worthy of an entire review of its’ own.

This release comes with an art zine. 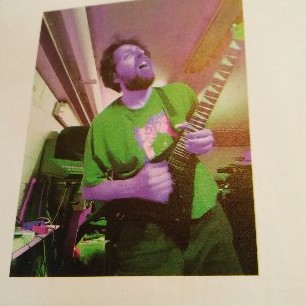 This is a Romain Perrot side project self described as Shit Folk. The Avant Garde random forms of cOLIQue leads me nicely into this, they kind of tie in on distant parallels. This is full of odd acoustic improvisations that are far removed from the walls of Vomir. Murmured singing/groaning occurs in the back ground, the guitar is plucked somewhere between random tuneless and melody; it becomes scratched and scraped as it progresses, the vocals descend into abstract, wordless growls and grunts. It helps me understand the Avant-Garde roots of Perrot and where he is coming from, this rings clear as a piano is abused. Things descend to more indistinguishable Noise in parts. It does have a sense comedic fun and really indulges the playfulness that sometimes occurs in bits of Vomir; but in other parts its randomness leads into serious territory.

It’s been good diving into a small part of this impressive, massive body of work. I’m Vomired out, thanks for reading.