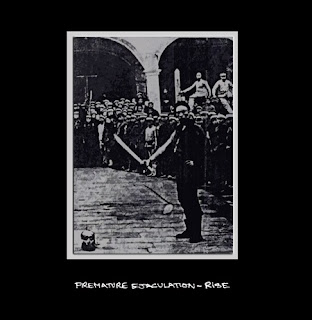 Rise is one of many previously unreleased Rozz Williams experimental recordings that have recently surfaced. Listening to Rise I would say it was made after Premature Ejaculation Parts 1 &amp; 2 and somewhere around A Little Hard to Swallow. Therefore it dates around 1982 – 83, it is unique as it pre dates Body of a Crow in each track being broken up into 12 different titled pieces. However the advancement of some tracks suggests this may have been compiled with later 84 – 87 era Premature Ejaculation sound experiments. A mystery? It features 12 different assaults of sound and the tapes was backed with Come Orgs’ Necrophilia album, unlike PE parts 1 &amp; 2, Rise is very clearly trying Power Electronics on for size and anti music with more successful results.

The cover features a triumphant soldier with a beheaded head on the floor in front of him and an army behind him. This is probably from the pre World War 2 holocaust ‘The Rape of Nanking’. The sheer horror associated to these events sets a violent theme to Rise.


Not Receiving is an assault of radio tuning distortion that really lays the groundwork for the later Happiest Tapes on Earth obsession with static. Voice abstraction (a continual Premature Ejaculation favourite) is simplistically demonstrated by settling on broadcasts but moving on before a sentence can be formed. Passages of music are only briefly allowed to blend with the static. Momentary flashes of American culture are briefly revealed before being violently erased from our minds by violent blasts of distorted static. The critique of American culture would be a continuous theme for PE.

Snakepit (Hide the Child) and Tunnels Turn to Walls offer raw instrumental passages of anti music, that offer brief but compelling passages of sound that would resurface in Premature Ejaculation at different periods.

Vacuum: Bolts of lightning like ignition break into a raw vacuum cleaner soundtrack, plainly conceptual in its everyday assault. The title adds a darker connotation, but the artful playfulness shows PE testing and poking at the seriousness of the noisier end of the industrial movement. This is funny, but a slight treatment of sound would have made this a lot more effective. However does this everyday event pull the horror of Rise into our daily life??


Reaching for Heaven is a pure tape assault, speed is slowed down to make the source totally unrecognisable, but it is a good and brief example of noise methodology. Business As Usual does the same but with an eruption of chaotic rumble. Both are good short demonstrations of noise, nothing more.

Vicious Circle is the best example of abstract guitar on Rise as it makes slight nods towards the quieter parts of Glen Branca but without the fullness of sound, Vicious Circle is sparse and spacious. Think Branca’s Ascension crossed with Earth’s Hex. Guitar would feature in some PE live shows and Living Monstrosities/Descent and was never really allowed much development in the later Rozz noise work. This is a shame as it began to flourish around this period.

The last five tracks tend to work around percussive effects and sample combinations more. The Coming of the Glory is a clickety clack racket. Rise breaks into dark ambient noise and falls into industrial percussion, Un…. carries the percussion on combining with a vocal distortion creating ritualistic repetition. (Not A) Laughing Matter offers a heartbeat rhythm, and noise box effect winding around eerie echoes a brief triumph of dark noise, all very symbolic of later PE. All these tracks offer rhythm without stumbling onto the dance floor as key and later industrial bands would.


On the Verge is an aggressive vertigo with ratchet like bursts of rhythm that descend into a rhapsody of rhythmic assault. Different sounds take on the rhythm for the periods of time. This is industrial repetition stretched to full on nauseous effect.

The minimal means of some of these pieces adds an element of dark humour to Rise; this was a key element to Rozz as a person that shines through here. However each track still achieves aggression successfully which works as an overall theme; tying in well with the brutality of the cover. The variety of approaches was characteristic of Rozz’s experimental work around this period; it stops the recording from becoming boring. The striking cover image and deliberate lack of audible samples make Rise very reliant upon the tracks made to achieve its’ aura of violence and serves to document a major step forward in Rozz’s early recorded work.