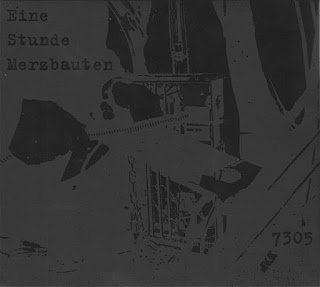 Eine Stunde Merzbauten is a four person Czech noise group formed from the dissolution of Napalmed in 2014 and they have released 8 albums since then.

When I got this, I thought this would be a Jerk-off project, but that is a Czech thing, Uncle Grasha’s Flying Circus appears to be this, but when the albums are played, it is way serious, making recordings that resonate historical depth and pure beauty; this is too, but in a very different way.

Big sounds erupt from my Boombox, it has that group feel like Genocide Organ does. Three tracks are melded into one, all covers apparently, but I wouldn’t know as I don’t know a lot about all three of the bands covered, this works as one track for me. I like the continual improvisation between elements that happens, the different components of noise/sound really do sound very separate; this does have a cold intensity that shows in the sound. The sounds seem in continual communication together, an abstract dialogue. There is a continued disruption and aggravation to the sound as noises begin to argue and interrupt each other.

A murky depth begins to comes through, it isn’t all sharp business as it sinks back to murkiness as the album moves from a big sound and drops in sound that are impressive, this adds suspenseful quiet to the work as tinkering jams punctuate the sparseness, the listener is trapped in freakish atmospherics.  The playful interactions go off for a long time, the dialogue of sound is clear as it isn’t hampered by too many big noises. The sound gradually intensifies and the improvision gets busy again towards the end.

This is effective noise improv and I like it - Czech noise is very intriguing.