Side B. Harsh Noise Movement. 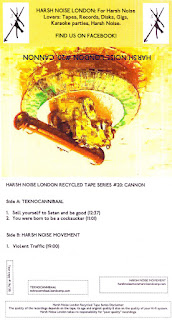 It’s now a frequent occurrence that I am discovering new noise projects through Harsh Noise London; HOMExINVASION and Wolvestribe are amongst many great examples of this, so I will say thanks before I begin this review - Thanks Harsh Noise London.

The Teknocannibaal side begins as if it is caught in a fog, this is deceptive it soon evolves into eruptions of harsh noise. Waves of distortion hit the synthesizer noise, but that continues to dominate the sound – this is a keen example of wavering synthesizers being the main focal point whilst other noises and variations of distortion erupt around it. As this breaks down, the work becomes about other noises and how they take up space and interact with other sounds. The work shifts along at a pace with some sounds staying and being the core of the sound. Things often die down to allow new sounds and arrangements into the entire equation – at times the work is busy and others it’s a sparse arrangement of conversing Harsh Noises.

The 2nd track also starts sparsely and eventually builds up, but it stays murky creating a muddier barrage of noise. Vocal roars come in and are seriously distorted and metalic. The constant, cut up barrage of noises remains swamped by a bass like fog.  This is two different methods of assault that work to good effect.

Harsh Noise Movement also demonstrates a murky sound, foggy and distant as if performing in the middle of a hurricane. This track moves along quickly, it doesn’t seem to dwell in the same place for too long. There is some really good dominant crackle for a time that has a thick depth to it and makes for an impressive focal point noise. This is than replaced by a deep bass roar. I like how this does have wall like characteristics, but replaces it with a cast of sounds, that are gelled together through constant movement and fogginess that doesn’t relent until it suddenly dies off.

I like both artists on this release, I felt Harsh Noise Movement has a mature and sophisticated sound. Teknocannibaal has an intuitive, playful and well considered sound. This makes both sides solid and strong combining for an excellent release, two more names on the roster. Join the Facebook group and keep up with what’s happening on this label.

Hey. thanks for the interesting blog. I started to read it from the beginning and just fucking - how much interesting music! It’s interesting that you not only upload music, but also write detailed reports on listening to each (!) composition. very good! fucking good

Thanks, I post links where to buy and do a detailed review, sometimes there is Bandcamp links so you can play and then pay like, but thanks, dedication to the scene and all.

I need to add, I don't put any illegal download links, I review what I buy or am kindly sent by artists and labels.