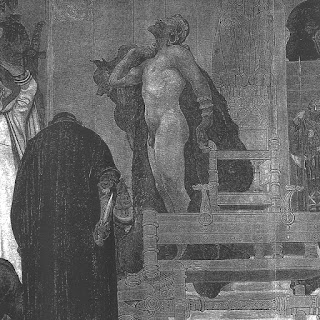 Descend with me to the unutterably subterranean depths of the Hadean underworld that is the music (and mind) of Trepanerungsritualen, in my opinion one of the most truly original projects to have emerged from the industrial scene in the last decade or so. While there are many outfits to which such descriptors as doomy, dark, diabolical, or unhallowed would apply, in this instance Thomas Ekelund’s darkly oppositional project to his Dead Letters Spell Out Dead Words encapsulates the very essences and definitions of these epithets.

Konung Dómaldr Vid Upsala Hängd (Expanded & Remastered) is just that – an expanded and remastered (by Frederic Arbour of Cyclic Law fame) version of a recording originally released in 2013 on US label Merzbild as a limited edition cassette EP and subsequently in extended 12” form on In Solace Publishing two years later. This new edition features, two new tracks, ‘Ur Oðinns Sidosår’ and ‘Elivágar’ (previously only available on obscure compilations), which brings it up to something like album length.

Immediately we find ourselves drifting down the Stygian waters through dank tunnels in the opening track, floating to a hellish destination populated by howling nightmares and bellowing horrors. A single accursed bell announces our arrival into this baleful region, signalling eternal torment and endless spiritual darkness, if not actual darkness. This is Sheol, filled not with the agonised screams of the damned, but instead with the oppressive weight of bitterness, dissatisfaction, grief, and remorse. Eternal torment here means a dead immortality of regret, of the heavy blanket of knowledge of a wasted life, and the twisting snakes of guilt.

The original EP’s opening track, ‘För Svears Väl’, tips us into a subterrestrial chasm inhabited by diabolical creations while a guttural voice utters curses and growls against a background of a reverberating drum. ‘Blodregn’ creaks into view, a misshapen creature wheezing arthritically and stalking a desolate corpse-littered plain buffeted by black winds with the shades of soul-devouring birds free-wheeling above. It segues straight into the following track (‘Den Fallne Dómaldrs Lik’) but now the wolves are circling, attracted by the heady aroma of spilt blood. Distantly, buried deep in the background, can just be heard the sounds of industry, belching smoke and bile, poisoning the air, ground, and anything living. Deep snarls waft over our heads, borne by those sulphurous currents, spitting gangrenous death and necrotising disease. Light, as dim and yellowed as it is, flies away to hide itself from the sights – it has no place here, no use or purpose. It is ashamed of, and laments for, its failure.

‘Elivágar’ gusts into existence, with blasts of wind even colder than you thought possible – this is the Hell of legend and myth, the place of suffering, of everlasting self-torment, and eternal self–reproach. There are no flames, no hellfire, and no brimstone, however – the torture and punishment is self-administered, and we’re here not because of the sins we’ve committed but for our sins of omission. We created this place – and for that reason we are forever imprisoned by its walls. It is a place of suffering, a self-defined one, and we haven’t been delegated here by some spiritual deity, but by our own selves. Its desolation is total, its bleakness unrelenting, its ruins blackened by our stink.

An immensely articulate and eloquent travelogue describing the lowermost regions of the hells we fashion for ourselves. Not only that, for me it’s also an indictment of the human condition: as a collective we appear to naturally gravitate towards the dark and unwholesome, but perhaps that’s because it contains more than a measure of the self-knowledge that we require to rise above it. Simplified, we must know the depths in order to appreciate the heights. Light cannot exist without darkness. And, if you’re looking for a champion who’s willing to delineate and articulate the profundities of the ineffably subterranean, then Trepanerungsritualen is that prophet.