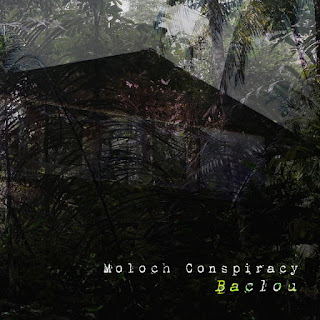 Baclou is a creature from French Guianese culture, also known as a Viscous Gnome (no, that isn’t a typo). Julien Lacroix, the light behind this project, spent some time in French Guiana and, judging from the snippet of information on Eighth Tower Records’ Bandcamp page for the release, the visit was a mixture of heaven and hell (mostly the latter, by the sounds of it). The general tone on this one is heavily oppressive, a weighty, thick miasma of murkiness and half-light swirling in an obscuring swampiness. It also feels uncomfortable: if Dante had been a dark ambient musician, then I have very little doubt his Inferno would have sounded something close to the opus Lacroix has given us here.

Like all cultures anywhere in the world, it possesses its bright spots in addition to its underbelly of dimly-lit practises and traditions, its beautiful stretches of untouched landscape and its desecrated fields and hills. The first track (‘Iridescent Lights’) does offer a small presentiment of both sides of the place: a light dusting of ringing, jingling bells float into view before a darkly shivering drone and bird sounds interlope, the layers massing in weight and concatenating into frenzied strings, pushing forward and retreating constantly, flying high and then diving back into the depths. Drones and bells compete for space, intertwining and twisting, leaping and swooping, until it achieves a shrill pealing before falling back.

Bleak squalls, accompanied by heavy downpours characterise ‘Bagne’s Nightmare’, the winds demolishing trees and buildings in their wake. This one paints a miserable picture, a flooded landscape awash with debris human and natural, broken and blackened. The atmosphere is oppressive and inhuman, a heaviness that pushes everything and everyone to their limits, taunting endurance, mocking our perseverance. In an environment such as this, biological systems fail and falter, and I am not just talking of the human body – the landscape suffers as well. Heat shimmers resound on ‘Fever’, drying out the thin skin of the soil, blackening, shrivelling, and breaking apart, disrupting the mechanisms needed to survive and prosper.

‘Baclou’ is a murky, viscous affair, exactly as the mythical creature this album is named after is described, an elusive but potent and dangerous entity to be encountered at one’s peril. It eyes us with malefic intent, a glowering consciousness that means us no good. Heavy exhalations, growls, low metallic reverberations acting as a warning: the indicators are all there, and we should heed them. ‘In the Forest’: normally it would be a place of deeply calming spaces, but here the trees and flora of the understorey press inward, blotting out as much light as it can, leaving in its stead a dim veil as if the canopy has been covered in gauze. In this half-light, the mind wanders, small sounds are magnified, and the shadowed crevices become deeper and darker, hiding who knows what? The forest has eyes, and their owners’ intentions are as mysterious and unknowable as the creatures are themselves. Yet ‘Intermede’ shows its other side, a busy, chattering, noisy cacophony, an island full of life and activity as mesmerising, chaotic, and kaleidoscopically colourful as any paradise.

Distant sweeping drones open ‘Signals’, heralding a return to the undergrowth, a place of scuttling beasties and clandestine perils. Darkness appears to collect here, as if it’s hiding from the light higher up. Perhaps bright illumination is a reminder of its inhabitants’ true natures, an ugliness that by rights should remain hidden. Grainy crackling introduces the final track, overlaid with a single drum and reverberations, an age-old quimbois or voodoo ritual performed in the dead of night on some lonely beach, or deep within the forest, the trees sheltering the secrets laid bare in the celebratory arena. It’s as opaque and inscrutable as attempting to see the heart of a jungle by standing on its outside.

Baclou speaks mostly of the sides of cultures and locations that the travel brochures would never dare to show and could never be shown in brilliantly airbrushed colour – the senses-sapping heat, the inhospitable and unforgiving climate and landscape, the fauna and flora inimical to humans, the capricious whims of weather and nature, the occult streams of culture kept away from prying eyes. It feels uninviting almost, a warning to stay away, or perhaps it’s a way of telling us to leave it alone to exist as it always has done and not to interfere. The canvas we’re shown here is depicted in muted and subdued hues, with only the occasional pinprick of light showing through – those sparse stars are indicative of life and activity but beyond that hint it doesn’t enlighten any further.

Let me just reiterate by concluding that this is a dark dark ambient album, a recording where any kind of illumination is in short supply. It’s heavy, oppressive, limiting, depressing, and overbearing: needless to say I loved it.