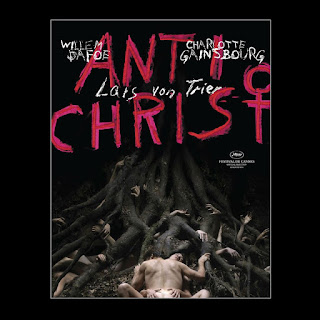 Before I go any further, I shall put my hand up and admit that I haven’t seen the film yet, although I keep intending to but never actually get around to doing so. I have to admit too that the only Von Trier production I’ve seen is The Kingdom and that was many years ago now (I did love it though). In other words I am going into this blind and without any filmic context, which some might aver could actually be a boon.

The ‘Intro’ rumbles in with a seismic growl before discordant string-like noises weave a disturbing note, in all probability setting the scene for what unfolds throughout the film. Following that is the prologue from Handel’s L’Ascio Ch’io Pianga, a sombre interpretation that also acts as a kind of emotional cue as to the tenor of Von Trier’s vision. Semmingsen’s voice is absolutely sublime and expansive, and its ethereality is no doubt assisted by its having been recorded in Copenhagen’s Kastelskirke. ‘Train’ follows, a subtle but very short rhythmical drone interlude, which in turn is followed by ‘Foetus’, a soft high wind accompanied by rumbles and shimmering chimes. ‘Attic’ is a repeat of the intro, and ‘L’Ascio Ch’io Pianga Epilogue’ is a shorter version of the ‘Prologue’ piece.

However, ‘Credits Part 1’ is on an altogether different plane, a keening wail and a mournful cry, a piece tinged heavily with deep regret and coloured in sombre hues of angst and bitterness. This is a fractured psyche writ large and laid bare, exposed to all who would look. ‘Credits Part 2’ again speaks of pain, of loss and sadness, a deep dark space that goes beyond the human and into something altogether baser and more terrifying. A ghostly breath is but a prelude to a cacophonic piano chord which eventually breaks into piece, followed on by rumbles and deep drones, counterpointed by mid-range chords, both of which flare and contract, swoop and dive, until their force is spent, or dragged down to earth by the gravity of the dark emotions ever-present here, never to be able to regain flight. The darkness here is total – a place for broken minds and bodies to hide in.

It’s fair to say that it’s a short soundtrack, combining elements of avant-garde sound design and drone, and then pitting it against the refined strains of a classical piece. The dichotomous and almost antagonistic nature of the soundtrack works to its advantage: on the one hand, we feel the pain of the couple after having lost their child, but then we also feel for them when that loss results in a tragic downward spiral of fragmentation and aberrant behaviours. Willem Dafoe’s character experiences visions, while his wife, played by Charlotte Gainsbourg, begins displaying violent sexual behaviours and sadomasochism. Purely from the standpoint of someone who hasn’t seen the film, this mixture of the almost demonic and soaring sublimity (exemplified by each style respectively) creates a disquieting tension that would only highlight the couple’s divergent reactions. One can only imagine how the loss of a child would affect the parents – it’s both heart-and soul-breaking. Here is an essay in the ultimate tragedy, and the ways that people cope with it.

Kristian Eidnes Andersen’s sound design is extraordinary, utilising an arsenal of instruments of his (and Von Trier’s) devising; blowing on blades of grass, rubbing stones together, water, horsehair bowed against twigs, and recordings made inside Andersen’s own body. These were them uploaded into a sampler, mixed together, transposed in pitch, and layered. What came out was something unearthly and unpleasant, creating a ‘horror’ ambience for a film that isn’t horror. It creates unease and a heightened sense of psychological disturbance that’s more than the sum of its parts. Less is more, as Andersen said in an interview – and he’s right.

Forget the fact that, in total, there’s only about 18 minutes of music, and instead revel in the anxiety, turmoil, and disquiet that these short pieces inspire. Coupled with Handel’s masterpiece, the musical, emotional, and textural tensions created as a result lift it out of the ordinary, and the juxtapositions of all these elements delineate their own narrative of two minds and souls forever shattered and battered to the extreme, by an event that’s dreadful beyond imagining. Also, marvel at Andersen’s ability to compress something as complex as a human state of mind into sounds that explicate those emotions perfectly and succinctly – now, if you’ll excuse me, I am going to have to hunt the film down (and the previous two in the Depression trilogy – Melancholia and Nymphomaniac) and get the full experience.

Antichrist Original Motion Picture Soundtrack will be released on September 6th on 12” vinyl in two editions: Eden Olive etched vinyl (in an edition of 250 from Cold Spring only) and standard black etched vinyl.

You can also order either version from Bandcamp, in addition to a download:
https://coldspring.bandcamp.com/album/antichrist-o-s-t-lars-von-trier-csr272lp

For an insight into Kristian Eidnes Andersen’s methods of creating the soundtrack then watch this short video:
https://youtu.be/-UTEVJHnxk0