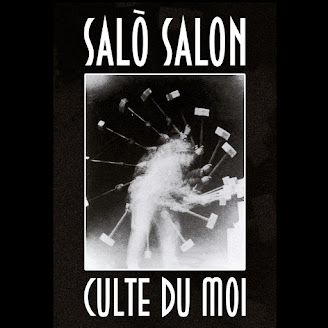 Culte Du Moi is the sixth release by Salò Salon who have been releasing albums since 2015. Based in Germany, they are one of the countries newer, Death Industrial acts to emerge.

The album begins with ambient, nightmarish sounds and sampled German speech. The Ambient feel dominates Culte Du Moi and this is built upon as the album unfolds. As the first track ends, we have more aggressive sound, with tortured shouting throughout, this is where the real Death Industrial feel of the work begins to show. The work then pulls back into more infected ambient passages, this part really references the work of Premature Ejaculation; infected, nauseous loops that seem to widen and pulsate. strong atmospheres are created in the ambient passages as vocal samples and suspenseful noises play out. Rises in sound or the introduction of more sounds intensify the work massively.

This album is true, sonically nauseous Death Industrial. It is a lot happier in murkier, dark territory than the more explosive, violent tracks. I like the atmospherics in the work, I feel that a lot of its ‘work as work’ is how the sounds and atmospheres are layered and varied so that the album remains continually interesting. There are feelings of angst, anxiety, terror, nausea, disease, aggression, decay and death covered in the work, the shifts in sound ensure a continual movement of effect.

This has made a good post lockdown soundtrack; it has ambition and depth. I recommend buying it.