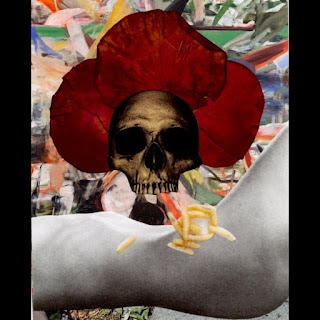 Both acts featured on this release have been active since around 2015. I know of them, but am new to the work of both, hearing this release has been an opportunity to become familiar with both artists work. Mutual Aid is a new label, digital Bandcamp, but rather than a Big Cartel or anything it has an Etsy, excellent. Cassettes copies are available on their Facebook page.

Broken crackle struggles to find form as it splutters and cuts out. This has a very broken yet intriguing sound, I find myself in two mindsets, do I go with the sound and enjoy it as that, or will it explode? I chose to go with it and take it in, oddly as No Rest unfolds, we get passages of hum that sustain further as if they are in overdrive, this serves as a high in the work, a kind of climax. This is one of the most fractured walls that I have heard, it never fully forms, but the cuts and breaks to make a slight formation, its Morse code formation is intriguing.

Beggin For Oxys I like, their sound is funny as fuck, the sound quality is beyond raw and it seems to be drums, guitar and vocal. They seem to have crammed a whole mini album into Several Informal Requests, new tracks erupt every few seconds. This is described as Powerviolence and I know shit about that, other than there was once a controversial page called ‘I Heart Powerviolence’. From this recording I gather Powerviolence is a pull back to pure pre-bullshit Grindcore, Hardcore Punk with a minimalist aesthetic. When you hear modern Grind which is essentially polished up Death Metal with Political lyrics or pointless, juvenile shit like Porn Grind or Gore Grind, this is a refreshing punch in the face. Back to Beggin For Oxys, This is murkier than other recordings that I looked up, however the rapid changes and shifts are exhilarating, the complete disregard for Production Values is admirable because what shines through is a recording that I have loved listening to; pure manic energy.

Two completely different genres spliced together. I liked both recordings and take my hat off to both for making it work. This is a case of throwing two ingredients in the mix and making a good end result. Separately both artists are worth checking out and this split is a very good place to start.