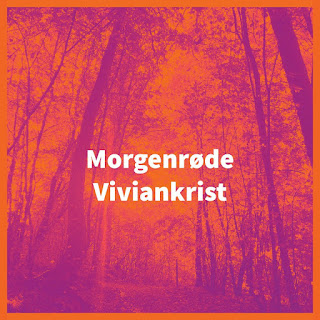 Viviankrist might be more familiar to some of you as Vivian Slaughter, bassist/vocalist of doom/black metal band Gallhammer. On this release from the UK’s Cold Spring label, we get to hear a ‘lighter’ expression of brutality and dissonance from her (lighter is used here in a relative sense, compared to her work with Gallhammer that is). Having described it thusly, do not for one millisecond think that this is any less challenging and in your face than her usual oeuvre; indeed I would go so far as to say that it’s a necessary counterpoint to the all-out attack of Gallhammer. This certainly isn’t a walk in the park on a nice sunny day. Whereas Gallhammer is all blackened crustiness Morgenrøde (the Norwegian for ‘dawn’) is painted in technicolour brightness but its obtuseness signifies the collapse of everything held dear, as the sun melts and the sky and earth bleed.

Album opener ‘Silent Soul’ is a blast of industrial noise, groans, and sirens, pinning Viviankrist’s manifesto to the tumbledown wall of some decayed manufacturing complex. Not as dense and lightless as you might expect given Viviankrist’s pedigree, it’s nevertheless the soundtrack to disintegration and annihilation. However, this is where it gets interesting: the following tracks diverge from here on in, cutting back on the nuclear nightmare of attenuated blasts and granular distortions and instead presents us with overtly analogue electronics, bleeps, rumblings, and twisted mutant disco beats. This approach does nothing to dilute the vein of utter despair and darkness running through every aspect of Morgenrøde.

Listening to the album I was reminded of early, pioneering electronic musical exploration, computer-driven rather than through the agency of a musician. This is not an affectation – it emphasises the ungraspable something beyond that lies behind the disruption of order and structure. It’s cold and impersonal music, and inhuman. Every piece has a steel edge, bright stabs of danger, and dissipating energy. Furthermore, despite some of its funkier, syncopated moments don’t let yourself be beguiled or deceived: this is a canvas painted with dust, rust, and waste, the hues subdued and darkened, and its atmosphere claustrophobic.

In other words it’s excellent and perfect for a Sunday afternoon.