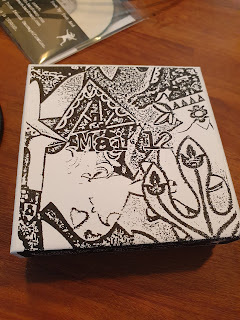 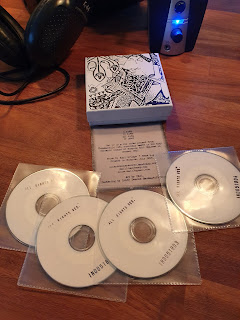 Wir Sind Die Terroristen, Gegen Die Touristen , translated - We are the terrorists, against the tourists.

I’ve been listening to Mai 12 since I did a Facebook Group Assault last year. This is where I go into a Facebook Noise group and review a few chosen artists who are advertising their sounds in there. During the assault I found Mai 12 with their gorgeously presented split with La Nuit Qui Tombe, I liked both artists and particularly Mai 12’s walls of subtle crackle. When I saw this 2018 box, I had to have it, the presentation was amazing, and it was 4 mini CDRs of Mai 12. Mai 12 are based in Thessaloniki, Greece and are currently living on the volcanic island of Nisyros, Greece. Members are Karl Grümpe and Rene p.g. They release their own uniquely designed tapes and cdrs, as well as on other labels and have been active since 2017.

Inner Demons is all about the art of the 3” CDR. To look at this little box is a treat, the bold black and white artwork, the delicate inserts, and small CDRs in plastic sleeves, it’s a perfect and amazing aesthetic object. I have wanted this for months, now it’s mine ever since finding out about the label in one of Facebook’s HNW groups - I bought 2 Inner Demons boxes in this haul. Each disc is titled by its running time. However, Wall reviewing is tough, you need to go right in there, so off I go.

The first disc has the Mai 12 ever present warm crackle; I can’t help relating it to Volcanos now I have spoken about them. The distortion seems untraceable, there is a depth of bass and movement resonating within. The sound seems to roll over itself, as if it is a shifting void in continual movement. The movement of back sound happens within the work, small shifts, accelerations, scrapes and tweaks between this and the front crackle happen. Humming pulsations are faintly recognisable in the background at the later stages of the piece too.

The second 19:59 is a more intense crackle that is deeper in sound. The background hum has a higher bass frequency and seems to communicate by bobbing. Frontal crackle is wavier, choppier and more defined in its texture. This is more of a straight wall piece that doesn’t roll like the earlier track.

The third 19:59 seems more immediate in being at the full depth of the work, the crackle again is rich. The background sounds are slightly more vortex like in depth as if slightly empty. But the crackle again dances at the forefront of the work and contrasts against this greatly, the odd falter has a dramatic impact, it jolts the attention.  The backing sound shifts and morphs throughout the track to a resonating hum that moves around the crackle to vary the interplay of sounds. AS the session progresses the distortion splatters more, causing interesting jolts to affect the levels of the work.

Finally, 20:43, the faltered levels of the previous disc are continued here as humming pulsates repetitively in the background. It’s difficult to fully identify the backgrounds in most walls, which is good as it adds mystery to the work. The crackle/distortion in this work is by far the most unsettled, it dances around massively goaded on by the pulsating back noise. The forefront sounds eventually begin to drag, the background gets increasingly creaky and both become livelier as the work nears its end.

For me, it’s brilliant having so much Mai12 in one box. Whether these are from the same session or a collection of different sessions I don’t know. This is rich work, if you like it and it’s great to have such a collection of sessions together. For any lover of Mai12s work or HNW listener this is an essential addition to any collection. I thoroughly recommend it.