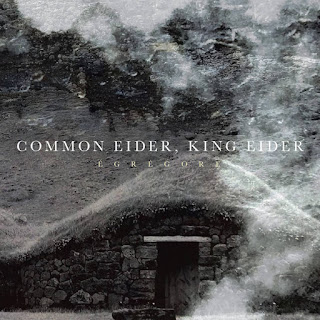 It would be far too easy to hurl superlatives at Common Eider, King Eider’s latest ritualistic explorations, even though it deserves all of them for its sheer thaumaturgic majesty. Egregore is indeed an apt title for this opus, embodying as it does the occult concept of a thoughtform becoming an autonomous psychic entity which possesses the capability of influencing the minds and thoughts of others. The four tracks aren’t so much meant to be listened to, but to be experienced: it’s the aural equivalent of mind- and consciousness-altering drugs. Gateways, if you will, to parallel realities and universes.

The music has its origins in ritual: B, S. s and Arexis birthed the compositions during a full moon night in May 2018 while ensconced in a cabin somewhere in the Pyrenees. And the sounds are as cold and isolated as the location where they were created. Here the modern world and all its appurtenances have been stripped away, revealing to those who would see that the underlying reality of our ancestors still exists, and that we are still surrounded by the forces that shaped our forebears and, furthermore, that they’re still capable of being felt and heard, and that they can still exert a powerful influence.

In fact, the listener can consider this to be a guided visualisation, a journey of active imagination. The ringing shimmer and breathy vocalisations of ‘Sun . . Fire’, the album opener, cuts through the dull and dreary existence of the everyday and draws us into a subterranean realm where the old gods still walk. ‘Breath ._. Wind’ continues the journey, bringing us deeper and closer to the heart to the central mystery. The shimmering ringing is still there, the thread of Ariadne perhaps, but here we encounter groaning entities that are more primitive and less encumbered by anything beyond their own natures – a notion that, given our current state, we should give heed to.

‘Blood ._. Water’ is the threshold upon the Dark Night of the Soul – the hierophant both exhorting and warning the seeker simultaneously. There is no gain without sacrifice: there are few willing to make the transaction and fewer still who survive it. Finally, once we’ve traversed and successfully negotiated the nightside tunnels, ‘Bone ._. Soil’ is the return to earth, reborn and renewed. Ariadne’s thread helps us retrace our steps and lifts us up into the light. This is Common Eider, King Eider at their most majestic, cosmic even. The tinkling of a bell is the signal to our consciousnesses that we must once more inhabit the meat-shells we call our bodies, and that we must inhabit the false world of maya and illusion once more.

There’s no question that Cold Spring have released a blinder of an album, one that seeps into the consciousness and invades the brain cells, to linger long after the final bell fades away. This one will be revisited many times, I suspect.