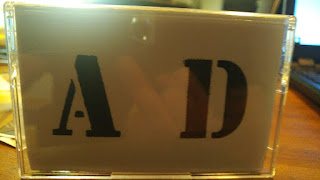 Active Denial are a Brighton based noise duo of vocalist Adam Apple and soundman Bucorvus Leadbeater; this is their debut three track tape recorded live in the Summer of Hate 2017.

The cassette looks like an early Con-Dom or Grey Wolves tape, it’s black text on white card, the sound is raw, it lacks the overly sharp production of a lot of modern Power Electronics which endears me to it immediately. To be honest when the project contacted me out of the blue via my FB page, I had a gut feeling this was going to be something special.

Psalm begins with a lot of chuffing repetition whilst sharp noise is pitched over this, Adam Apple rants with increasing anger, this never seems to end or loose momentum. Holy chants wave calm over everything until electronic noise interferes to make way for vocal samples telling everyone that they’re shit. It is then everything explodes, this time the use of noise is far more manic and assaultive. The vocal explodes in temper cursing at the sample, hating it repeatedly. Smoke or Champagne is more of a fight than an abstract passage of sound. The noise seems to antagonise both, making this a three-way assault.

This is a strong debut for the sheer brutality of the given performance, it’s very Street PE, it doesn’t seem to be a gear fest. It bears parallels of stripped back rawness to Scum FC, obviously different in content for sure, it’s way more continually switching between inward self to outward self. But it is a brief burst of raw, unpolished explosive, sonic energy. This is undoubtedly my favourite PE/Industrial recording of 2018. Active Denial you’re it until I find something better.