-Elephant in the room you can control.
-I’d rather stay in my hell than share your paradise. No remorse.
-Psychometric test.
-Larva epidemic.

The ACL side of this split starts small with eerily atmospheric and minimal sound. It eventually juxtaposes vague background dialogue and noises that gradually build up. Beeps and drones are playful; other sounds contrast this by snarling at and threatening the listener. In parallel to this the sound shifts from being chaotic to knowingly structured.

On here vocals are used as noise and aren’t often coherent or spoken; screamed hysteria cuts into tracks dramatically and builds extra layers on what is already there. On later tracks beeps and drones become nauseous and intimidating as horrible vocal sounds bully until waves of static offer an alternate static, waves of static distortion flood the proceedings. Larva Epidemic is part ambient soundscape interrupted by urgent repetitive noise.

ACL gleams when the noise is left to do most of the work and titles are suggestive without binding the work too tightly to an overall concept. As I play this release I can immediately say that this is thankfully the  ugliest, rawest ACL release in ages – Best work yet. 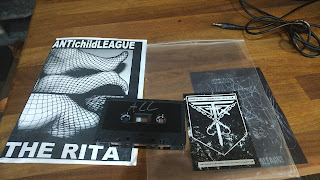 The Rita are now a duo of Sam McKinlay and Arlie Doyle, they deliver a slab of noise which is direct and immediate; you are thrown straight in the middle of layers of deep, dense, static walls of distortion. This is cut into with drops and quick stops in sound intermittently with change provided by some impressive shifts across the stereo range and changes of the overall tone of the walls sound. Screaming noise reveals behind the main wall of static and its continually crackling distortion as my attention shifts.

As with many Rita releases the cover is adorned with legs, this time in fishnet stockings/tights. Gaya Donadio appears on the rear cover in heavy eyeliner and a fishnet mask. Women’s legwear - a regular Rita theme dominates this recording. I personally respect this dedication to one’s own interests and with this I finally get why I love the Rita releases that I have. The bold abstract qualities of The Rita have forced the same out of ACL resulting in a solid recording that is typical of Obsessive Fundamental Realism’s growing line of releases. 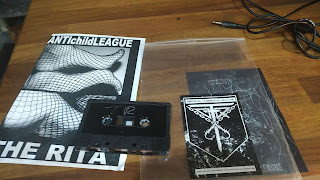