Ramleh - A Return to Slavery


A Return to Slavery 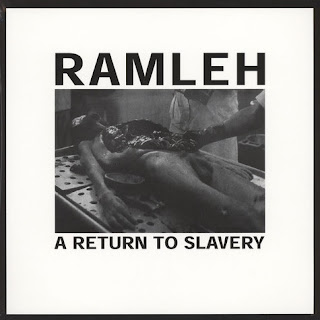 Formed in 1982 Ramleh are one of the key pioneers of the early UK Power Electronics scene. They initially combined blunt subject matter and artwork: their sound has a layered psychedelia adding confusion and distortion. Intensified emotion is buried into everything they do, this is also something that seemed prominent in the work of several Broken Flag artists. Ramleh has always seemed to aim to unsettle the listener emotionally, especially in their live approach, this was still very evident when I saw them several years ago.


A Return to Slavery is one of many recent reissues of early 80s Ramleh material originally from their early days on their own Broken Flag label. Originally recorded in 1983 as a split album with Philip Best’s Libertarian Recordings project. It now has The Hand of Glory material on the B-side to replace it, now making this a complete Ramleh release. The Black and White cover artwork shows a body being dissected, framed in the classic Broken Flag visual layout.


The Return to Slavery side revels in combinations of low end and high-pitched sounds while Gary Mundy and Jerome Clegg scream out shards of agonised vocal noise. Bleak samples are coupled with rumbling electronics as sharp frequencies dissect everything.  Their use of sounds will often combine around four elements and suddenly drop down to two and let them linger as if to allow for the vocal noise to have an intensified effect. Oddly, there is still a warmth to the sound, cold starkness wasn’t really Ramleh’s thing; the Ramleh approach is very different to other pioneers of the time. The vocals radiate sadness, hurt and pain; like the artwork, it further conceptualises the overall concept.


Recorded four months later, The Hand of Glory is a denser recording that is even bleaker than A Return to Slavery. Warbling psychedelic electronics and sharp wailing noises build up to continually shove the vocals into the background as electronics eventually oscillate and squeal over them. However, as the record progresses the defiant vocal shoots to the forefront and echo around the proceedings.


In one of Facebook’s many Power Electronics/Death Industrial groups, one of Ramleh’s later releases (Hole in the Heart) was recently listed as an essential Death Industrial recording. At first, I was confused by this, but on the Return to Slavery release, there are key essential sounds in place that would later come to fruition as an influence on other artists of that genre such as infected keyboards, pained vocals, dramatic shifts between full and minimal sound with over the top repetition.


Ramleh continue to push new boundaries with their Noise and guitar based work, particularly the recent Circle Time album. Their most recent Power Electronics album 2009’s Valediction along with Mundy’s recently prolific work as Kleistwahr continues to develop and intensify the Ramleh sound of old. However, a Return to Slavery serves as an important document in noise history and cements Ramleh’s importance as true innovators and a continued force.