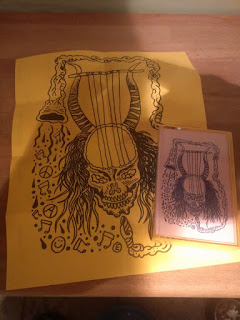 Having previously reviewed the first Bloody Head tape a few months ago, this new album has come hot on its’ heels. The project has now been around on the live circuit and had time to fester. Buying this cassette was exciting due to this and the strength of the debut; I was keen to see what has happened since my first encounter.

Failed experiments doesn’t fester and bubble in the same scum pit as the debut. Instead it has a bigger and better produced sound; this is almost a different band. The sound no longer splatters or spews as before, instead it is beginning to become a vortex of sound that is slowly built up; which is where things start to get really interesting. The original influences and points of reference shown before are also starting to die off, which makes things a lot more interesting.

The vocals still shout, the drumming is still primal and the guitars now combine choppy riffs and build up to a sea of noise. The vocals at times become a part of the whole sound, sometimes they are almost buried within it; left to battle with the rest of the sound until they emerge triumphantly. It is as if the sound is at war within itself at times. With the newer expansive sound; I can’t wait for more. Failed Experiments is excellent, varied, and ambitious work. Bloody Head are starting to form a strong self-identity.