Part 2 was the second Premature Ejaculation tape released by Rozz Williams and Ron Athey in 1981. It was never officially released, only copied for friends. Here in it's fully remastered double disc form, original artwork; it differs greatly from Part 1.
Part 1 was a series of differing experiments within the noise /industrial /experimental genre. Part 2 is one long continuous 45 minute work; it contains a lot of the methods explored in part 1 and it yet attempts to work them all together. Part 2 functions as a journey (or a trip.) across the American landscape. In-between bursts of frequency assault, wind tunnel like sounds move along changing to engine noise and back. Noise is pushed to unbearable frequencies at various times throwing out sounds that would not be out of place in David Lynch's Eraserhead. Deliberately or because of recording quality, sounds are broken for periods of time, either way it is incorporated into the entire sound.

Fractured voices appear regularly; inaudible conversations, Preachers in the street and film dialogue. The voices are never given full clarity, their speed is mutated to become 'other' sounds that work in the entire equation; the voice is abstracted elsewhere. Although not the first, this predates a lot of current voice based noise (Maja Ratkje, Kylie Minoise, and Massona) and lies in a chain of abstracted voice work within experimental music. The vocals are frequent interruptions or stops in the journey.

Further stops include fairground noise, domestic sounds, train tracks and TV ads. These are not glorified, if anything it is an empty lonely dark trip. More and more upon each listen Part 2 becomes re representation of the American landscape as wasteland.

Part 2's use of noise is not pure or focused enough to be considered pure noise or power electronics. However it is clear that there was already a fully formed awareness of all the electronic extreme genres as there are still some industrial concerns in PE at this point. What is very evident is that after Part 1's experiments in sound, Part 2 is a confident successful conceptualized long passage of work. This is far from fully formed in sound, but it is strong and bares some hints to PE's future work. PE would never really do one long work in their label released work, yet ambient passages of sound became their forte; mental associations could always be made to strong suggestive effect. Part 2 does prove PE to be a project well capable of sustaining works for long periods of time.

The bonus disc is not part of Part 2, but five separate recordings Ron and Rozz made around a year later in 1982 tackle religion and noise.  However these do show a better quality of recording and the beginnings of a more cohesive approach to P.E's work. Choir arrangements are boiled and others turn into hallucinogenic nightmares; further religious torment from Rozz. There is a long track from a sex education video of children's voices describing the process of sexual intercourse, the sample is not touched, just played in its entirety and all the more disturbing after the hellish sermons that came before. There are two final tracks that present a more accomplished and aggressive minimal noise assault, very different to what there is today. This is a primitive important document. The journey begins to find its direction. 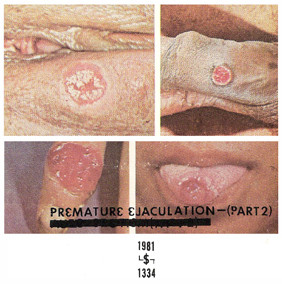