Started in 1981, Premature Ejaculation (PE) was the most prolific project of the late Rozz Williams (1963 – 98). Much of the material was released on Happiest Tapes on Earth, Dark Vinyl, Gymnastic, TripleXXX, Malaise Music, Baader Meinhof and Cleopatra records. There was a lot of PE material released by Rozz himself and Happiest Tapes that has never been commercially available to fans and they have now been unavailable for some time.

Malaise Music was a label started by Rozz’s close friend Erik Cristides in the 1990s, one great compilation was released (Merry Maladies), but future plans to release all of the rare PE material on Malaise were cut short by Erik’s untimely death in 1997. Original masters of the cassettes were purchased by John Collins and Malaise Music was reactivated by two German fans. Benjamin Siebert has expertly remastered all of the lost recordings and the first release is Premature Ejaculation part 1. The original cassette has been remastered in it’s entirety onto one disc, it has been broken down into 7 untitled tracks. Additional found bonus material from around the same time has been added onto a second disc.

These recordings were Rozz’s first recordings of industrial and noise music, key influences at this time were Throbbing Gristle, Johanna Went, Monte Cazzaza, SPK and Boyd rice. An additional mind blowing fact is that Boyd and Rozz were meant to collaborate on a project before Rozz’s untimely death.

Part 1 highlights how open ended the later named Deathrock scene was, Rozz was active in Christian Death, yet had a strong interest in Industrial. 45 Grave had an experimental project around the same time called C.E.D.S. (Citizens for the Exploration of Deep Space) Indicating that the movement had a sideways influence from Industrial.

Track one begins with a long passage of synth frequencies, this material is far more aggressive than a lot of PE’s material. I consider this to be an early attempt at Power Electronics, a movement that was at this time in its infancy, Whitehouse were very much in their early days at this time. Due to the lack of distortion here I would consider this acoustic in comparison to what would come from the Power Electronics movement. Premature Ejaculation appear to be testing the boundaries of noise at this time, shooting higher frequencies across the recording at intervals. The synths then break into low frequency drones. Track two begins with some higher frequency passages of noise. As the track progresses it falls between an attempt at music concrete and power electronics.

Track three begins with the sound of bubbling coming from underwater whether this is containers or a person is unclear, however a heartbeat takes over as the solo sound, this is consistently rhythmic and manipulated. A helicopter sample takes over to be quickly replaced by a pulsing synth and sounds recreating baron atmospheres work around each other. This sample would crop up on later PE releases; PE constantly recycled their own sounds on other recordings. It is this track that begins to formulate their later approach to their releases. Human made pulses and sounds bring the collage to an end.

Track four continues sound and sample combinations to more suggestive effect; the human sounds are painful and unpleasant. Suggestiveness is where PE flourished, there are no obvious details, and samples are very everyday such as toys and cheap keyboards. There is a mock religious theme to the overall feel, but it’s not too specific so other avenues of thought are opened. It also predates Current 93s early sound collage work an extent. Tambourine percussion opens five as an intro to a further human chant. The two sources work over and around each other, this being the most effective use of combined sounds. 6 begins with a guitar noise feedback episode which pays light homage to Lou Reed’s metal machine album, considered later on to be a major influence on contemporary noise. Raw frequencies return to build primitive walls of sound that close PE part One.

The bonus disc shows another different aspect to Premature Ejaculation in that a lot of untreated electronic instrumentation and toy sounds unite in a chaotic unstructured jam. This is SMEGMA homage plain and simple; SMEGMA’s Ace Farren Ford would work with Rozz on later projects. What’s interesting is the layering of different sound sources would flourish in PE’s discography where as raw noise assaults and unstructured instrumental work would be put aside and used on early Heltir releases such as Ill Bancheto del Cancri/VC06 and 69 rituals.

Overall this is a very raw recording; each area works individually, but it is a presentation of separate experiments of abstract sound manipulation. It highlights how Chuck Collison’s later involvement was crucial in helping to bond separate threads together as well as reaching higher production standards. It shows an open ended approach before PE tightened its focus on selected working methods. It shows Williams and Athey, in areas to be thinking practitioners of noise with purpose and conceptualisation. The original artwork (redone by Scottie) along with certain tracks are the beginnings of the later P.E. Death Culture aesthetic. 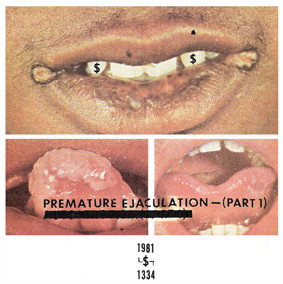