Select Discography.
Guns. Money. Bullets. Skulls. (2006)
Bone Gospel. (2010).
The Mellow Sounds of Switchblade Cheetah. (2011)
Trash Sucking High Heeled Scum – 2012?
Chapel of the Bitch (2016).
I was introduced to the sounds of Switchblade Cheetah around 2009 when their singer registered on an old Rozz Williams forum that I used to admin. He mentioned the band that he was in; Switchblade Cheetah. I checked the link and I was impressed by tracks that were on their Myspace. Over the years as Myspace died out and Facebook came to prominence and I’d lost touch with their music. I recently remembered them and started listening to them again. I finally started buying their albums from Zodiac Killer and Worker Bee Records, I was blown away by the impressive tracks and constant evolution from album to album.  I have done an overview of the output of this mysterious cult band as their discography is an essential for anyone wanting to hear forward thinking and original punk.

Tallahassee, Florida based band Switchblade Cheetah evolved from an older band called Peppermint sometime around 2006. This led to their debut release ep: Guns. Money. Bullets. Skulls. Members are also involved in other bands including Neon Lushell and Smoke Mountain. Switchblade Cheetah belong in the camp of bands that believe keeping Rock and Roll dangerous and raw is the only real way it can be kept alive. 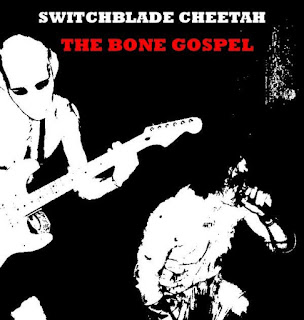 This is one of the earliest releases containing all the tracks from their 2006 debut ep; Guns. Money. Bullets. Skulls. Those tracks are in a more stripped down Hardcore style. However, as the album progresses the bands garage punk and melodic sensibilities start to show, particularly on tracks like Feral Children and I--We-Lets scare Tracey to Death. This style doesn’t fully blossom until their next full length release.

The Bone Gospel is essentially a collection of early and later hardcore tracks; a selection of tracks where the band develops melody and harmony, some live tracks and demos. If the sections were separated into different discs or different releases it would more cohesive. The delivery of the live tracks is even more adrenaline charged, scummy and forceful than their output on record at this point. This demonstrates Switchblade’s effectiveness as a live act and successfully charts their artistic growth- no doubts there. 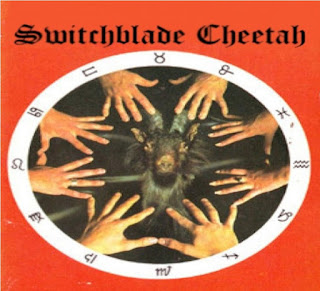 This still offers traces of hardcore but it is morphed into an odd proto- Punk, adrenaline fueled garage rock. But things also move into just keyboard and vocal tracks like ‘Bag of Bones’ and ‘Slaughter High’. ‘Hair of the Goat’ and ‘That’s OK’ are tracks that really do up the ante and show glimpses of progression into the next album’s aesthetic. A real knowledge of the wider pre-punk roots of Rock and Roll coupled with an excellent sense of melody and harmony is demonstrated on High Heeled Scum.

The occult/ horror film imagery on the cover adds a blackened sense of danger to the album. This is Scum rock with a 1960s-garage aesthetic, pure talent delivered through lo-fi methods washed over with fuzz and waves of distortion. This is the album that sets Switchblade apart from their peers.

Chapel of the Bitch Workerbee Records (2016) 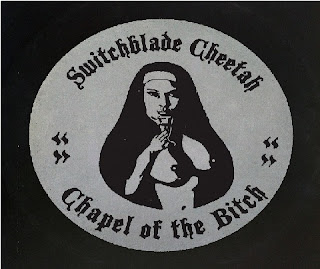 Four years later we see Switchblade Cheetah immersed fully in a blackened 60’s influenced psychedelia. The darkness of earlier records is fully and maturely infused into the new sound. Chapel knows how the 60s ended, there is no wide-eyed optimism, or hip simulation, only a journey through the dark underbelly of the 60s that would ultimately lead to the end of the decade’s innocence. The Cheetah is our guide through Acid Masses and Blood Baths that ultimately portray the landscape of The Chapel of the Bitch.

Chapel’s 13 songs make this a lot shorter than other Switchblade albums and says goodbye to the days of Lo-fi. This is a shining example of Switchblade Cheetah’s vision fully realized to its most effective standards so far. Chapel of the Bitch stands as the bands absolute high point and was well worth the wait.

Choppy:  What prompted you to become Switchblade Cheetah from the Glampunk of Peppermint, were there any similarities in sound or was SC a totally new start in style?

Switchblade Cheetah:  Peppermint was essentially nothing more than a misguided attempt to score a record deal. We didn't enjoy doing it, and all the recordings have been destroyed. Switchblade Cheetah was formed in response to that bad experience.

Choppy: Early on you had a kind of fractured hardcore sound, but on the first album The Bone Gospel it begins to disintegrate, melody and harmony begins to enter the picture. What influences and personal changes caused this.

SC: I think Cheetah's early sound was mainly an attempt to distance ourselves from our previous band. Not long after the release of our first EP, we actually started to feel just as limited as we did in our previous band. I think it was around this time that we started to open up and incorporate more melody into our sound. We've both always been into melodic music, and Cheetah's early stuff is actually the sound of a band attempting to repress its natural melodic impulses. The later music is more representative of who we really are.

C: What were your lyrical influences and themes, were they personal or based around other influences? I am particularly thinking of Chapel of the Bitch and High Heeled Trash Sucking Scum.

SC:  Trash Suckin' is obviously all over the place musically, and is probably the best representation of our different influences, which range from classic country like the Louvin Brothers to early punk and lo-fi stuff. Chapel is almost exclusively a result of our love for 60s garage rock and psychedelia, although we do jump around a bit on that album as well.

C: How often have you played live, what has the reception been like?

SC: It's been several years since we played live, but we generally got a good reaction...at least from the people who didn't walk out. The shows were not very audience-friendly, in fact, one of our main purposes of playing live was to berate the hipsters in attendance. In addition, our live shows were comically intense, to the point that Brian suffered several on-stage injuries during our short playing career.

C:  I see you kinda rooted in Scum Rock, on stage injuries is testament to this, but you are essentially progressive, your discography constantly evolves and shifts. Where do you want to take Switchblade Cheetah, at this point about half a year since the album's release, where do you want to go as a band?

SC:  Our primary focus right now is Smoke Mountain, but Chapel is a good representation of the direction Cheetah is headed.

C: You mentioned you have another band; Smoke Mountain, do you see this as a separate project or a side wards way of evolving Switchblade Cheetah? Also does Neon Lushell have any influence on Switchblade?

SC:  Smoke Mountain is a completely separate project, but we think Cheetah fans will dig it. It's heavily influenced by 70s doom metal. All I can really say about Neon Lushell is that its in a world of its own. I'd definitely recommend it if you like Cheetah's stranger stuff.